The latest SP2 update brought about a change in audio conferencing functionality that has received mixed feedback at best. Unfortunately matters were further complicated by an unforeseen issue that made accessing ad hoc conferencing from the clients difficult. This further aggravated matters. We apologize for this inconvenience.

In this blog post I will highlight our plans to address these matters.

Ad Hoc Conferencing from the client

Scheduling Conferences from the clients

In SP2 it was decided to move scheduled conferencing to the web client, because it allowed us to integrate with the calendar apps of Google and Office 365. So it was decided to fire up the web client from the softphone as these functions would not be available from the native clients. We are now reversing this decision and including a schedule conference function in the native clients once again. This change is in the works and should be released quite soon, hopefully before the holiday season. It should be noted that this will only work for 3CX contacts, numbers and email addresses.

Inviting attendees via 3CX rather than Google or Office 365

In SP2 we added new methods of organizing audio conferences in the web client that allowed you to easily schedule the conferences in your favorite calendar app and invite attendees from your contact lists. Because this way RSVP to attendees was possible, we hid the option to use 3CX email and 3CX contacts for scheduling conferences which breaks RSVP functionality as this has to be sent from the organizer. We have found a way to circumvent this and are going to reverse this decision and re-introduce the 3CX email invite option. This option will be reintroduced in SP3 as it requires a web client update (January approx) So in SP3 you will now be able to organize meetings via Google, Office 365, 3CX and by downloading an iCAL.

Prior to SP2 attendees would be called automatically to join the conference. No other PBX did it this way. Callers call the conference number at the required time. With the advent of calendaring apps on smartphones to remind you of conference calls, we no longer saw a need for this – in our view – clunky feature. It seems the feature had a sizeable fan base, so we have decided to bring it back. In SP3 you will see a system wide option that allows you to switch on outbound calling for audio conferencing participants – this includes internal participants or participants invited by phone number.

We certainly understand the importance of audio conferencing for 3CX, and we will continue to improve this functionality further in the coming releases. There are numerous threads about audio conferencing on our forum – please concentrate all feedback in the comments of this post so as to centralize the feedback and communication. 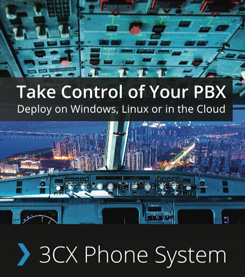